Despite 24 years of sustained economic growth, profound structural changes in the Australian labour force have ushered in a new class of low-wage work. Long-run labour trends show how Australia has created a large pool of flexible and lower paid jobs. While this has made some goods and services cheaper, and Australia a more competitive economy, subdued wages growth may also be sapping domestic demand and economic growth impacting spending power in the economy.
The ABS national wage report showed the slowest growth in the 19-year history. Wages grew by 0.5 per cent for the quarter, or 2.1 per cent for the year to June.
The July survey showed a 0.1-point drop in the unemployment rate to 5.7 per cent largely because of a surge in part-time employment at the expense of full-time jobs. For example, the weakest wages growth of all was in the retail sector, just 0.1 per cent for the June quarter. This industry, Australia’s single biggest employer with 1.2 million workers, has been able to reduce its costs through hiring more juniors, trainees and casual workers. Employers are still pushing to drive down labour costs by taking more workers off penalty rates.
This is also a reflection of changes in the workforce as employers seek to casualise their workforce by engaging more part-time and casuals. This in turn hides mass levels of underemployment.
While unions have been pushing for reasonable increases in the minimum wage, and they battle to hold on to weekend penalty rates, they’ve been unable to address growing job insecurity and casualisation.

Where it is Easiest to Find a Job 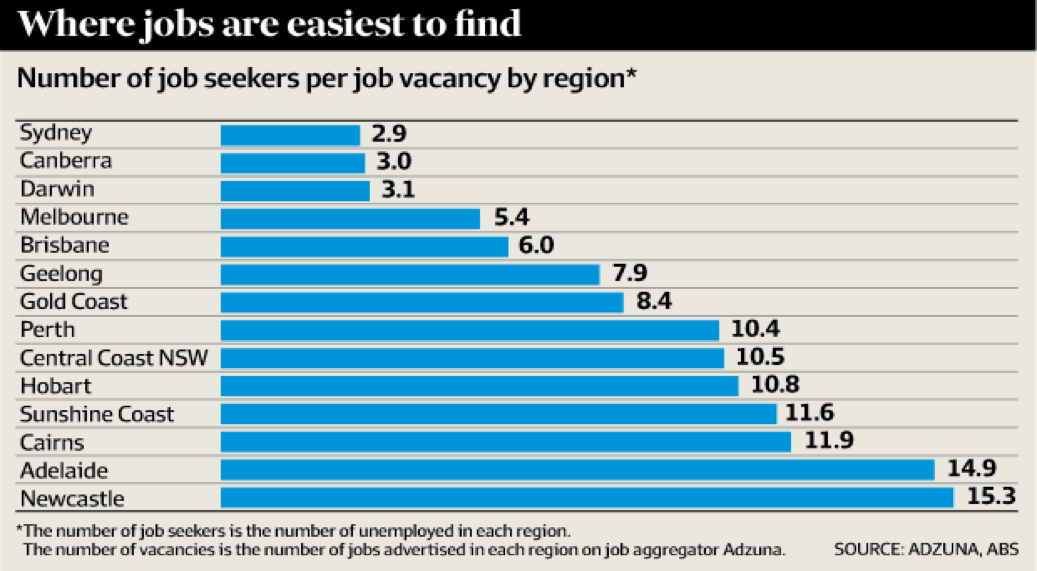 Sydney is the easiest city in Australia to find employment according to figures which compare vacancies recorded by job aggregator Adzuna with the number of people officially recorded as being out of work.
In the Sydney region there are only an average of 2.9 job seekers per job vacancy, compared to 3 in Canberra, 5.4 in Melbourne, 6 in Brisbane, 10.4 in Perth, 10.8 in Hobart, and 14.9 in Adelaide.
In general, it is easier to find a job in the large capital cities than in regional areas. In Newcastle the figures show there are 15.3 job seekers for each job vacancy, 11.9 in Cairns, 11.6 on the Sunshine Coast, 10.5 on the NSW Central Coast and 7.9 in Geelong.
The figures are based on June 2016 statistics.

Underlying global dividend growth has slowed to 1.2 per cent (year-on-year to $421.6billion) in the second quarter of 2016, from 3.1 per cent growth (in the first quarter of 2016), putting further pressure on Australian investors to search for steady income.

The global dividend index showed Australian dividends fell -0.2 per cent (on an underlying basis), while the largest payer of dividends, the Commonwealth

Henderson Global Investors analysed 1,200 of the largest firms by market capitalisation and found that the US engine of global dividends decelerated to its slowest level of growth since 2013. US dividends grew by 4.6 per cent on an underlying basis, which also reflected subdued profit expansion.

“This US slowdown began late last year, but should be considered a normalisation to more sustainable levels of dividend growth, after several quarters of double digit increases,” it said.

On a headline basis, global dividends rose by 2.3 per cent (by $9.7 billion year-on-year), partly due to the muted performance in the United States.

By region, emerging markets recorded the strongest annual dividend growth of 12.1 per cent, followed by the Asia Pacific region, which recorded 5.9 per cent growth.

Lenders are discreetly changing loan conditions, imposing new borrowing terms, changing rates or reducing the amount a buyer qualifies for by thousands of dollars which is forcing property buyers to either look for other loan options or move out of the market. Lenders are increasingly pulling out of deals at the last moment, forcing loan renegotiations on worse terms. Under the watchful eye of the Australian Prudential Regulation Authority, lenders are being told that they have to keep loan growth under 10 per cent a year in a bid to control demand and keep a lid on prices.

In the current market scenario lenders nearing or breaching the speed limit are either raising rates and fees, or in some cases not accepting more loans until demand has cooled.  Criteria used to assess a property loan are being tightened so that living expenses are increased, assessable incomes reduced and maximum borrowing caps. Borrowers who sought pre-approval for a loan six months ago before looking for a new property are being told their home loan application has expired and no longer qualifies.

For example, six months ago a couple earning net income of about $116,000 could have qualified for a loan of about $1.1 million, according to Mortgage Choice.

Under the new rules they would qualify for about $70,000 less. During this period variable rates have dropped by up to 25 basis points. Living expenses used to qualify for loans are routinely being increased by 20 per cent and assessment rates – which is a “stress test” rate to assess whether the borrower can cope with successive rate increases – are being raised by 15 basis points.

Other lenders are not taking into account certain types of income. For example, overtime, bonuses, commission payments are either being excluded, or only a percentage considered in calculating eligibility.

Some lenders, such as P&N Bank, one of the nation’s largest lenders, is making it tougher for applicants with “less dependable” jobs to qualify for loans. Borrowers are also barred from special savings and investment accounts that allow lenders to draw down equity in their property. Last month ANZ announced tough new measures intended to tackle fraudulent applications, such as authorising documents missing pages, untraceable employer references and suspicious income statements.

Due to the government’s lack of appetite for any more work on tax reform the taskforce set up within Treasury to lead the tax white paper process will soon be disbanded. Prime Minister Malcolm Turnbull has indicated there will be no major tax changes in this term beyond the government’s superannuation package and progressive company tax cuts.

Modelling of a GST increase was provided by the unit but dismissed by the government on the basis that compensating low-income households would cost too much. PwC partner Paul Abbey said the fact that serious tax reform was off the agenda was disappointing given Australia desperately needed something to spur growth in real income. A lack of income growth was a recipe for electoral dissatisfaction, the likes of which had given rise to Donald Trump in the US, he said.

“Mr Abbey took a swipe at the government for failing to sell the importance of tax reform to the electorate. The series of state taxes which we know impact negatively on the economy.

“Slogans like growth and jobs failed to engage the public,” he said. The public needs to understand that tax reform is all about the quality of their jobs and the growth of their income. It’s about their ability to buy a new car, enjoy a holiday and pay for their healthcare. Mr Abbey said Australia tended to make tax changes either in crisis or after very long gestation periods.

“The debate to expand the GST I would not view as over. It might take 10 or 15 years to make it happen.”

It is time for the tax professionals to be wary of potential tax scams as the Australian Competition and Consumer Commission reports a loss of $1 million this year. 300 Australians have reported losing money to tax scams in the first half of 2016, resulting in a total loss of $1 million according to ACCC. This follows the 400 individuals who reported losing money in the 12 months prior, with $1.6 million lost in total.

ACCC deputy chair Delia Rickard said these incessant scams come in a variety of forms, but generally claim that individuals have underpaid their taxes and are required to repay the tax debt immediately or face frightening repercussions such as arrest.

Tax scammers are particularly aggressive, so many people feel pressured to pay quickly without questioning them. The most threatening scammers even say that police are on their way to arrest you but can be stopped if you pay immediately. The scammers generally access personal information they find online to try and convince victims they are legitimate and usually ask for payment for an ‘unpaid debt’ via wire money transfer, credit card, direct debit cards or even iTunes cards. Most use voice over internet protocol (VOIP) phone numbers to disguise the fact that they are calling from overseas however, the call looks like it comes from a local phone number.

Individuals must be careful and caution should be taken while dealing with any unusual requests to send money via money transfer, gift card or other digital currency as they could be highly suspicious.

With new data revealing $11.7 billion is sitting in lost super accounts, the ATO is encouraging all Australians to reconnect with their super using its online services. The ATO has recently released its latest lost and unclaimed super data.

The postcode with the highest amount of l